“My daughter can see now! My utmost effort will be to groom her as if she can stand on her own and need not to clinch my dismal fate in future. I will dedicate rest of my life for my children”. Mrs Ira Begum was so rapt to see her daughter Tasnim ; able to see after getting back her both eyes sight that she could not check tear. “Now she will be allowed to get admission in school”. In the coming January 2013 Tasnim is sanguine to start her new life with her new friends in a school. “My Tasnim will be a teacher in future” upbeats of Mrs Ira.

At the age of 2 to 3 years Tasnim parents could recognize that their daughter was unable to see. She used to walk around to get anything or to response someone due to her blindness. Mrs Ira talked to her husband who was a mere day laborer about their daughter problem. But he did not pay any attention to his wife rather became annoyed. It evoked in his mind that treating Tahmina would require huge expenditure and it might not bear any significant contribution to their family because Tasnim was a female. With a broken heart Ira Begum had started searching the possible way and organization where her daughter could be treated. She could not spend much time for this purpose because she had to bear the expenses of the family as well. Working in other house, in the field as a farmer or sometimes in nurseries the wedges she used get was not enough to feed neither her children nor enough to bear the educational expenses of her elder son who was the student of class four. She had to manage time for Tasnim also as she could not see. Keeping Tasnim alone in house Ira Begum would remain in a panic while working outside. So her earnings would fall down sometimes. All the situations made Ira Begum very frustrated. 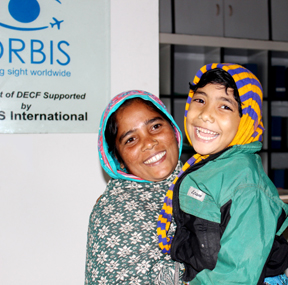 One day one of her brother in law who was a Auto Riksha Puller informed her about Deep Eye Care Foundation where Tasnim could be treated. And he also informed her that one of the Friend of Sight (FoS) of Deep Eye Care Foundation would reside in neighbor union. Ira Begum contacted FoS Anisa of DECF and explained all about Tasnim. After 4 years Ira Begum got a hope that her very beloved lap child might be able to see. Last year 2012 Tasnim was refused to get admission in school. So Ira Begum was so eager to get the treatment within this year as if next is no more missed from her daughter life. But listening to the expenditure behind two eyes surgeries made her dumb. Still a little hope was beckoning her as she had come to know from her brother in law that DECF had some sorts of

privileges for the poor patients. She explained all her wretched family conditions to Anisa. With the help of Anisa Tahmina was brought to DECF. After examination by the ophthalmologist she was found to have bilateral developmental cataract. Her left eye was operated on 13 Oct 2012 and got back 6/9 vision. That time Tasnim and her mother became happier than ever before. Ira begum was counseled several times on the necessity of the 2nd eye operation. But eventually DECF staffs had to bring Tasnim on their own after two months. Because Ira begum felt shy to request for the 2nd eye operation at free of cost and it was out of her imagination that DECF might be so generous for her daughter sight. On the next day of 2nd eye operation when Tasnim could see well a billion dollar lovely smiling of Tasnim and her mother captivated all the staffs of DECF which thrived doing more good jobs.