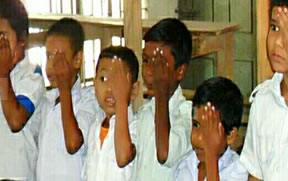 Introduction:
Deep Eye Care Foundation is a non-government organization established aiming to serve the rural and underprivileged urban population of Northern region of Bangladesh. Over the years this hospital has grown with well-developed infrastructures and eye care facilities. It has ophthalmic equipment including IOL micro-surgery equipment, Phaco-surgical instrument & other necessary equipments also.
There are 10.8 million people (4.3 million are children) living in the greater Rangpur region, most of them are very poor and underserved, including the most vulnerable “Char Population”. The flood and associated erosion can also destroy assets, make households homeless and contribute to disease occurrence and lack of employment. Healthcare, education and other services are typically absent or severely underdeveloped.
Deep Eye Care Foundation with support of ORBIS International had implemented a project named “Developing the capacity of Deep Eye Care Foundation to deliver quality eye care service in the northern region of Bangladesh.” It is five years project started from April 01,2012 to March 31,2017. This project addressed the problems of inadequate access to quality eye care services and uncorrected refractive error among the children of five northern districts (Rangpur, Kurigram, Gaibandha, Lalmonirhat and Joypurhat). “Childhood Blindness”, a number of diseases and conditions that occur in childhood and early adolescence, most of them even more serious disorders, can be prevented or avoided. But when they remain untreated can result in lifetime blindness. To meet the crisis the project had implemented its program from April 1, 2012.