“Friends mock me calling blind boy and not allow me to play with them. Even at school I face problem to study. After having eye operation I can see clearly and can go to school and play with my friends.” Rabani expressing his feeling just after opening bandage from eye.

Golam Rabbani 8 years. He is studying in class II at Mesta Primary School. Rabani came of very poor family. They have no land. His father’s name is MD. Rafiq, Vill. Mesta, Union: Sonerhat, Upazila: Pirgonj, Dist; Rangpur is a small businessman- selling chickens at bazaar. He has two sisters and one brother.
Rabbani’s father couldn’t identify the eye problem of his son. The school teacher informed him that Rabani is the first boy in the class but he can’t read books and can’t recognize while something offer to hand.
One day he heard miking for eye camp which was held at their Union Office by the support of Prime Bank. During eye camp doctor said that Rabani has eye problem and will require eye operation. Then his father visited an eye specialist at modern, Rangpur. Doctor was asking Tk. 15000.00 (Fifteen thousand taka) for eye operation. Being a poor business man it was impossible for him to bear such amount for operation. 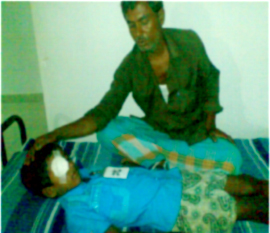 Then his cousin advice him to visit Islamic Relief Bangladesh, Boldipukur. They referred to Deep Eye Care Foundation, Darshna, Rangpur. Rabbani’s eye was diagnosed by an eye specialist. Normally such eye operation cost is Tk. 10000.00(Ten thousand taka). Learning such big amount operation cost his father became disappointed. He was crying for help to restore vision of his son. Being poor businessman he can’t bear the operation cost. Then he was sent for counseling. Counselor informed him that there is a provision for free of cost operation at Deep Eye Care Foundation for 0-16 age children. Since Rabani is 8 years old so he can afford this free of cost operation. His father was surprised learning such opportunity for eye operation. He thanked God and those who are proving such generous service to poor people. At last Rabani was operated free of cost which was subsidized by DECP Pediatric Eye Care Project funded by ORBIS International. Dr. Khairul Islam, Ophthalmologist performed phaco surgery on July 17, 2012.

Having restore vision Rabani was smiling and his father was shading tears in joy. Thus Deep Eye Care Foundation is serving dedicatedly to retrieve visual acuity of poor children.